Winner of the first

YouTube Link: https://youtu.be/5Lmyg9-zj7A
(Open to all. No registration required)
The Award Lecture:

The Tamil Heritage Trust-Prof S. Swaminathan Heritage Award aims to recognize an individual who has made exceptional contributions towards the understanding, dissemination and preservation of Indian Heritage, thus encouraging interest and involvement of the general public and raising the awareness and appreciation of India's rich history, literature, arts and culture.  The Winner of the Award is invited to deliver an Award Lecture.

Madhusudhanan Kalaichelvan is the Winner of the inaugural edition of the THT-Prof S Swaminathan Heritage Award.

A Graduate in Architecture and a gold medalist in his Post Graduation, Madhusudhanan specializes in conservation and architectural research. He has been an academic for a decade mentoring students of popular schools of architecture. He is well versed in fields of art, architecture, heritage, cultural studies and vernacular practices.  He is a popular speaker on a wide range of topics associated with heritage, religion and literature, with over two hundred hours of content on YouTube.  He is the founder of RATHAM, a non-profit organization that curates guided Heritage tours to heritage sites and structures of historic, architectural and archeological importance

Madhusudhanan serves on Government instituted panel for conservation of temples in Tamil Nadu.  In 2014-15, he worked as the Senior Consultant to document around 300 heritage structures in Kanchipuram for the prestigious HRIDAY project.

Madhusudhanan was conferred the Vedhavalli Memorial award for outstanding contribution towards heritage promotion by a young achiever in 2018. He won the Best Lecture award in 2016 from the Madras Music Academy for his lec-dem on Araiyar Sevai. In 2019, he was conferred the title “Ilakkiya Chemmal”, recognizing his proficiency in Tamil literature. In 2020 Kumaraguru College of Technology, Coimbatore, recognized him as the Youth Icon of 2020.

Chengam, a constituency in Tiruvannamalai district with a meagre population has several layers of history embedded on it. Situated on the banks of Cheyyaru that jogs its way down the Javadi hills forms a natural boundary to the northern side of the village. It was on the banks of this river 2000 years back a not so rich poet wandered in search of the mighty gates of the fort of Nannan Sei Nannan, a king who ruled this part of south India. Indeed, this village with dusty streets and narrow lanes now once served as the capital city of an ancient kingdom.

On the southern side of the village runs an ancient highway that connects Karnataka through Hosur. For several centuries this has been an active trade route connecting the eastern shore further south. Several archaeological studies conducted in the recent past has helped us ascertain the antiquity of the place. Chola inscriptions, Vijayanagara temples, local legends, colonial vestiges and more have painted this village’s cultural fabric with a splash of colours.
Madhusudhanan has specially chosen this topic for the Award Lecture to honour Prof. Swaminathan’s cherished dream of collating what he calls a “Culture Atlas” - a manual that documents every settlement for its history, culture, arts, flora, fauna and more. In this lecture, Madhu will create this map for Chengam, drawing on its rich cultural, political and archaeological history.

The Talk will be in Tamil. 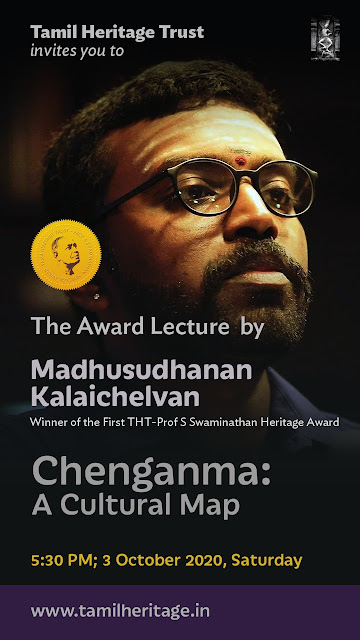 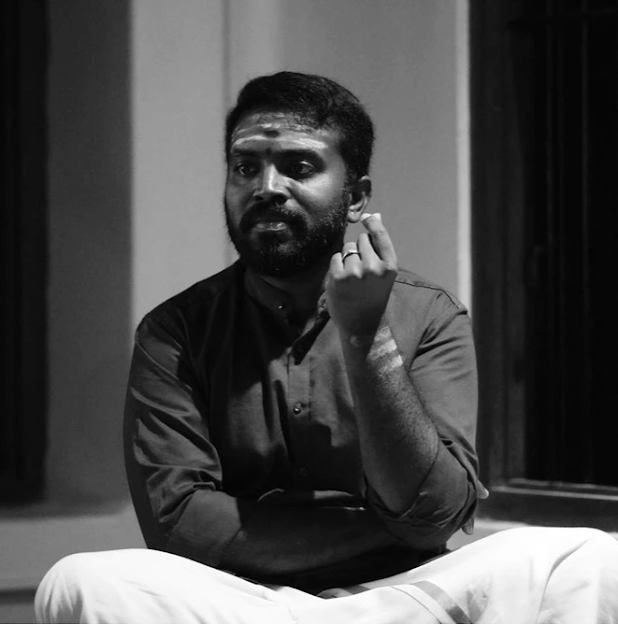 The Chennai based Tamil Heritage Trust (THT) today announced the name of Madhusudhanan Kalaichelvan as the winner of the inaugural THT - Prof. S. Swaminathan Heritage Award.

The Award was instituted by THT to honour the work of individuals under the age of 50 who have made significant contributions to deepening the general public’s knowledge of Indian heritage, widening the audience for heritage appreciation, and in the process strengthening our existing knowledge base of heritage assets and resources.

The award is named for Prof S. Swaminathan, retired Professor from IIT-Delhi and co- founder of the Tamil Heritage Trust, whose books, monographs and talks on many facets of India’s heritage continue to be a source of inspiration for heritage enthusiasts. The winner was chosen from a short-list of nominations by a distinguished 6-member jury comprising historians, scholars and public intellectuals.

Accepting the Award, Madhusudhanan Kalaichelvan said, "Tamil Heritage Trust has been doing yeoman service in creating interest and awareness in the areas of history, heritage and culture amongst the common public. Instituting an award in the name of its founder, Prof. Swaminathan to recognize an individual's contribution in these fields is a way to encourage more active participation by youngsters. It gives me immense pleasure to be chosen as the first recipient of this prestigious award and makes me realize my responsibility."

“The institution of this award is an important milestone in the history of THT”, said Prof S Swaminathan. “Our vision is to inspire in our audience a life-long interest in India’s heritage with clear and exciting communication which is based on deep knowledge and scholarship. Madhusudhanan Kalaichelvan’s work reflects the essence of our vision. I hope this Award and its first winner will inspire many in the coming years to make this their life’s work”, he added.

THT was founded as a non-profit Trust in the year 2010 with a vision to put the common man in touch with the beauty, grandeur, and the rich storehouse of knowledge that is Indian heritage. The Trust which is entirely volunteer-driven attempts to deliver this through several initiatives - monthly public talks, annual thematic conferences, site seminars and study tours to places of historical interest, workshops on temple architecture and museum collections and an outreach effort through schools to sensitize young students to Indian heritage.

The award which carries a citation and a cash prize of Rs 25,000 will be presented to Madhusudhanan at a ceremony to be held in October. The winner will deliver the Award Lecture on a topic of his choice at the function. 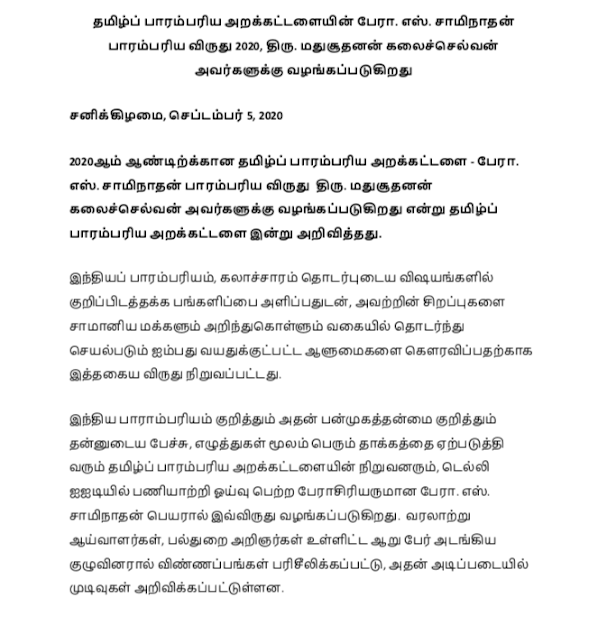 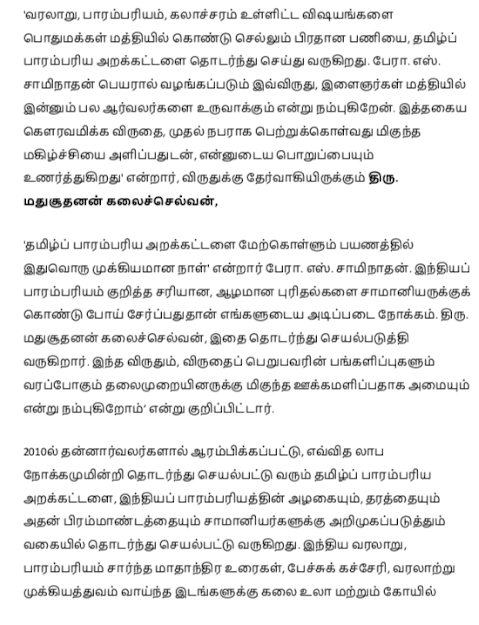 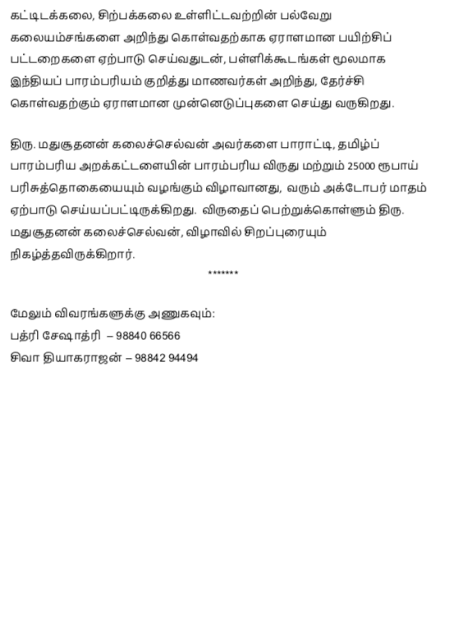